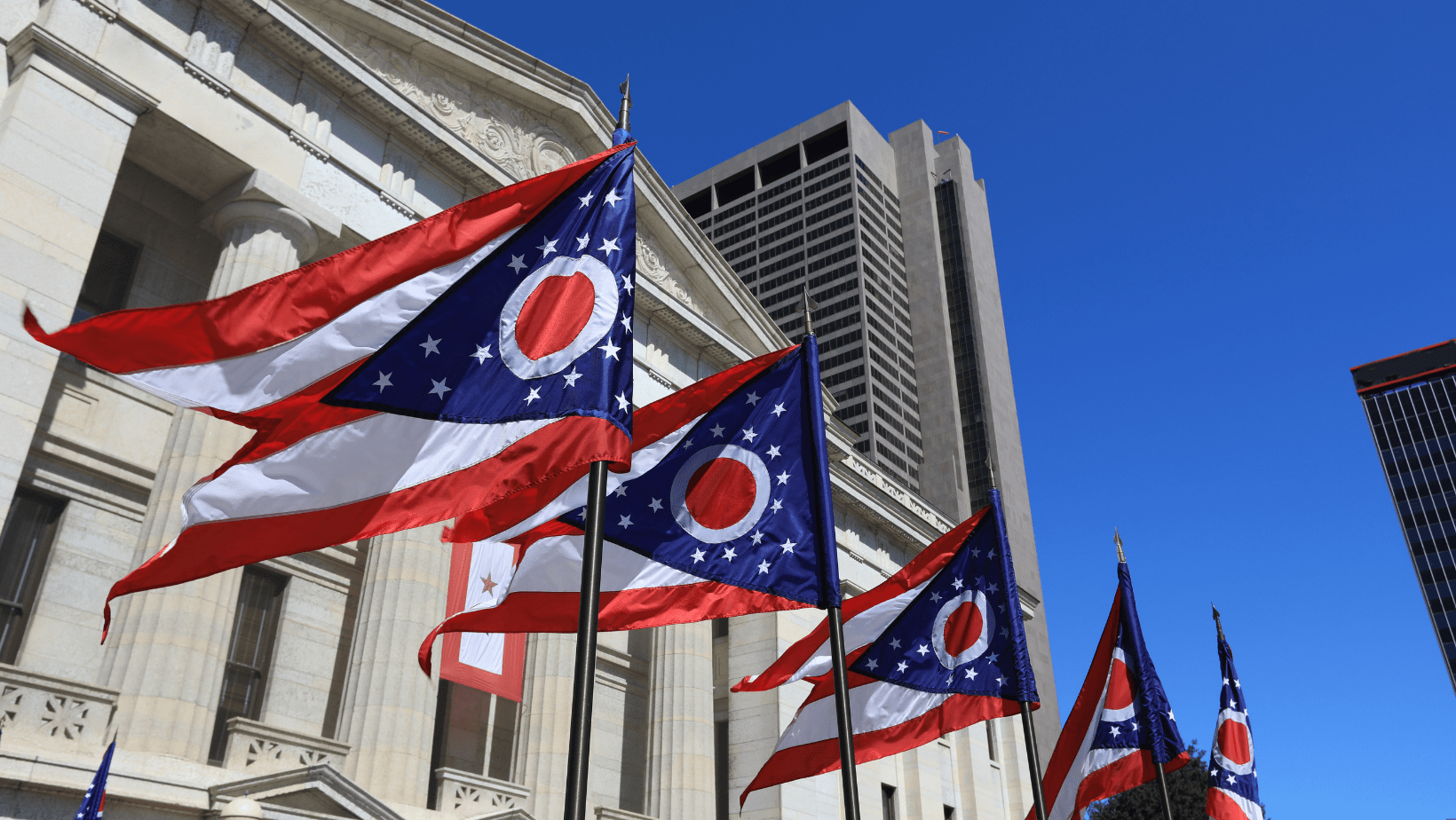 On June 9, 2021, the Ohio Senate Finance Committee and Senate approved amendments to the state’s annual appropriations legislation which could cut municipalities off from federal funding opportunities and inhibit public broadband providers, including those who are already offering service.

NCC also joined as a co-signer on a letter submitted by the Coalition for Local Internet Choice.

Communities like Hudson and Fairlawn built networks to fill connectivity gaps left by providers. Now, they serve business and residential customers, offering transparent and consistent prices for high-speed service. Throughout the Coronavirus (COVID-19) pandemic, their networks kept businesses and residents connected with the reliable broadband service needed to comply with social distancing restrictions.

Medina County’s open-access network, Medina County Fiber Network, is partnering with Lit Communities, on a $50M fiber to the home offering which will also have a small business component. Their commercial network now has 14 carriers directly connected to their fiber, providing Internet and voice services, and serves eight of the ten largest employers in the County.

Dozens of other communities in Ohio use their own fiber networks for municipal purposes. They offer reliable internet access to government buildings, support smart city applications that improve public safety and transportation, and provide the backhaul necessary for making public wireless networks available.

Local broadband initiatives are critical to ensuring that all Ohioans have the tools and services they need to get online.

Other States are Expanding Opportunities for Community Networks

Ohio’s proposal bucks the trend of eliminating restrictions on community networks. In the United States, 17 states have restrictive legislation in place that makes establishing municipal broadband prohibitively difficult. In some states, state law requires municipalities to conduct a referendum and garner public support before construction is able to commence. Last year, over 75% of voters in Denver, Berthoud, and Englewood, Colorado supported authorizations exempting their cities from the state’s broadband prohibition, joining the at least 109 Colorado communities that have done the same.

In other states, municipalities are unable to construct new networks if there are any other private companies offering broadband within the municipalities’ jurisdiction. States like Ohio use FCC data as a basis for their maps, but those maps are well known to overstate broadband availability. Using inaccurate data as a basis for deciding which communities can provide broadband may preclude communities that have no active providers from filling network gaps on their own. An increasing number of states, including Arkansas and Washington earlier this year, have reduced these restrictions.

If signed into law, Ohio would become the first state in ten years to enact new restrictions which directly impact a community’s ability to build and operate a network. 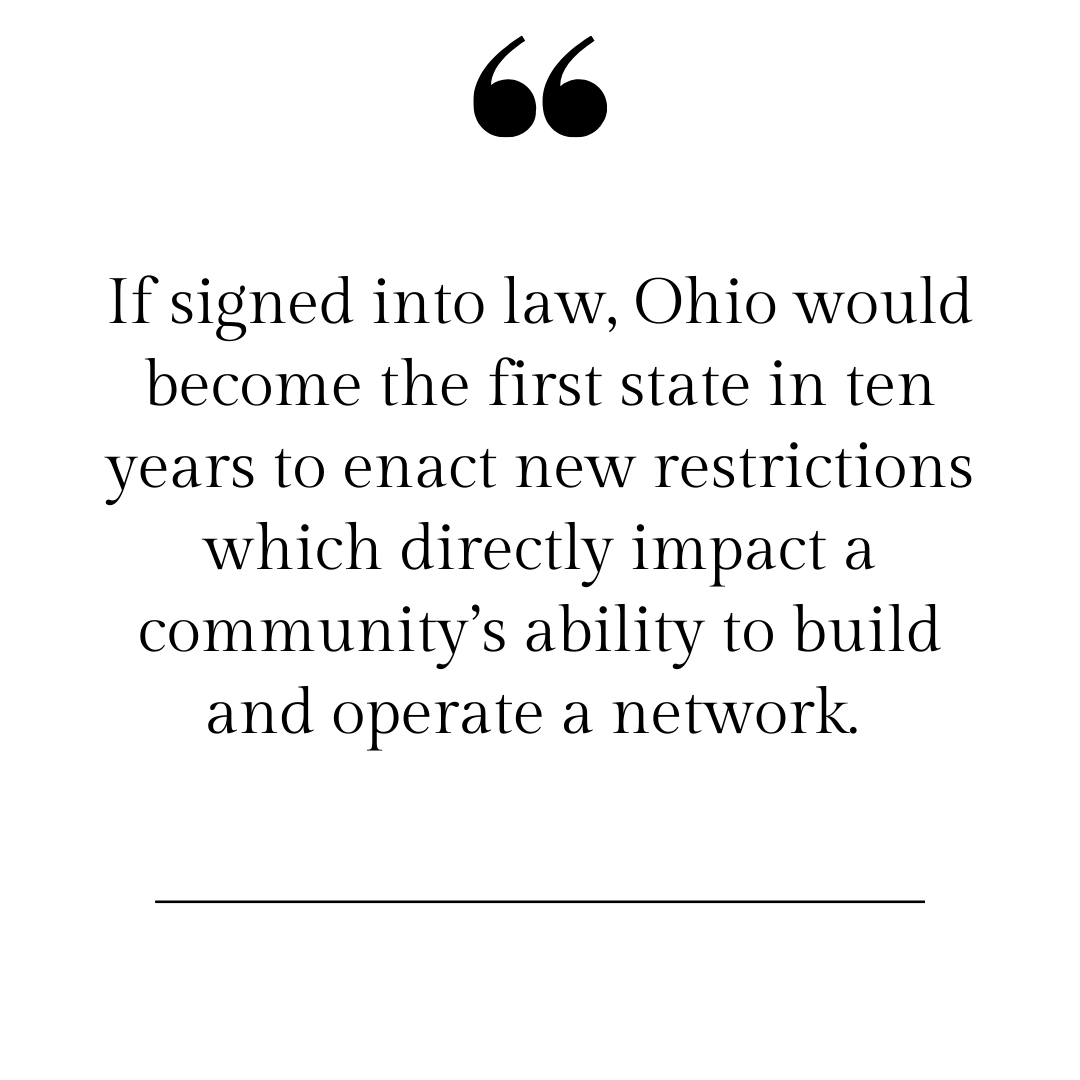 The Ohio amendment evidences a shift in the way in which state governments restrict municipal broadband deployment by taking aim at the funding sources municipalities use to deploy broadband. While not outright prohibiting a municipality from deploying and operating a network, funding restrictions make it restrictively costly for municipalities to expand digital infrastructure.

Even if the approved language is not an explicit ban on municipal broadband, it could serve as a de facto ban, rendering municipalities unable to fund or maintain costly networks. Public opinion has shifted broadband from a luxury to a necessity. If it is not politically feasible to support an outright ban of municipally owned or operated broadband networks, fiscal policy may be used as a pretext.

Numerous opportunities for broadband funding have become available to communities through the CARES Act, Consolidated Appropriations Act, and American Rescue Plan. Restricting communities from using the funding available for essential projects will ultimately hinder the bipartisan goal of ensuring universal connectivity. Flexibility from states and the federal government is key to expeditiously and efficiently improving local service offerings.

The communities in the greatest need are too often also the most disconnected.

With support from states and the federal government, local leaders can help ensure that every home and business in their area has the connectivity they need to access the numerous services that have moved online as a result of the pandemic, and the digital tools they need to thrive in the next several decades.

FairlawnGig Save Municipal Broadband in Ohio!

What Washington’s HB 1336 Means for Municipalities Across the U.S.