Next Century Cities Hosts Do Not Pass Go Screening and Discussion

On Tuesday, March 26 in Washington DC, Next Century Cities partnered with the Coalition for Local Internet Choice, the Institute for Local Self-Reliance, the National Association of Regional Councils, and National League of Cities to host a screening of the film Do Not Pass Go.

Do Not Pass Go is a short documentary that explores how and why Wilson, N.C. was prevented from expanding fiber optic internet access to neighboring communities after building a successful network for itself. It illustrates the potential of community owned networks to improve connectivity for residents, as well as the lengths that their opponents — especially the largest cable and telephone companies — will go to to prevent them. 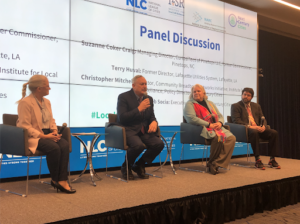 “We have to open up state laws so that we can allow for local solutions,” said Craig. “There’s no one size fits all solution, and we need to allow for local communities to decide what’s best for them.” 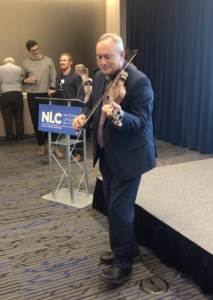 Once their conversation wrapped up, attendees mingled and enjoyed refreshments and a lively cajun fiddle performance, courtesy of Terry Huval.

“There is no doubt that the reason we do what we do is to provide good service at as low a cost as we can, and provide reliability,” said Huval, who led Lafayette’s effort to build a municipal fiber network. “That is the heart and soul of what happens in the public power space.”

Interested in viewing Do Not Pass Go or hosting a screening in your community? The film trailer and ordering information is available here, and the Institute for Local Self-Reliance has a packet that details how you can host your own viewing here.