Last week, Next Century Cities partnered with the State of Connecticut Office of Consumer Counsel – working with Elin Swanson Katz, Consumer Counsel for the State of Connecticut, and Bill Vallée, Broadband Policy Coordinator for the State’s Broadband Office – to host Connected New England: Local Solutions for Broadband Development in Hartford, Conn. Connected New England brought together national and regional leaders to discuss today’s most pressing issues in broadband deployment and how to improve connectivity in New England. Panels touched on topics including local mayors’ experiences, successful models in broadband deployment, E-Rate and funding opportunities, as well as 5G and small cells. The event also featured an update about the recent municipal gain ruling in Connecticut and what that means for municipal broadband in the state.

Individual panel and keynote videos may be found here, and a recording of the full event can be viewed below:

Thank you to the Internet Society for making the recording of this event possible!

State Representative Josh Elliott welcomed attendees in the morning, comparing the vision and investment needed for broadband infrastructure to the nation’s efforts to build transportation infrastructure in the early 20th century. Our primary goal, he said, should be high-speed, affordable internet access for everyone, not just big businesses. However, noting the many assets Connecticut has that could be combined with universal broadband to attract new industries, Representative Elliott asked the crowd, “Who’s to say that we can’t become the Silicon Valley of the East Coast?”

Senator Blumenthal was unable to deliver the morning keynote because he was called to jury duty. The Senator’s State Director, Rich Kehoe, spoke on his behalf. In his prepared remarks, Senator Blumenthal stated:

“As many of you already know, high-speed broadband is critical to economic development, levelling the education gap, and improving public health outcomes… There is no one cookie-cutter approach, which is why conferences like Connected New England are critical to facilitating a dynamic conversation among policy makers in communities across our nation.” 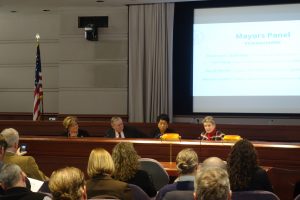 Our first panel of the day featured three local mayors and was moderated by Connecticut State Senator Beth Bye. Mayor Toni Harp of New Haven, CT; Mayor Marcia Leclerc of East Hartford, CT; and Mayor David Martin of Stamford, CT discussed the roadblocks they have faced while trying to improve access to broadband in their communities including political opposition and financial challenges. They also explained how they have managed to make progress, and agreed on the fact that improved broadband infrastructure would be a “game changer” for the state.

Mayor Harp referred to the pushback she has seen while trying to improve connectivity in her community, saying, “Oftentimes people who are making decisions about these things are people who are thinking about it from their own perspective, and are really far behind the curve of where our children are, where our grandchildren are, and where we need to be as an economy.” 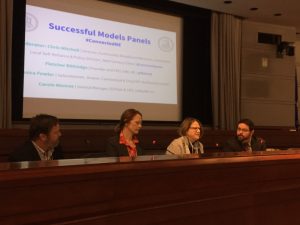 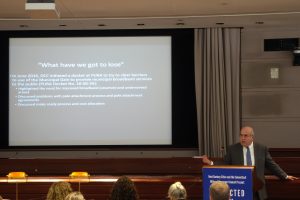 Joe Rosenthal, Principal Attorney for the State of Connecticut Office of Consumer Counsel, then took the stage to give attendees an update about the recent municipal gain ruling in Connecticut.

After lunch, we kicked off the second half of the day with the public release of Dividing Lines: Why Is Internet Access Still a Luxury in America? Maria Smith, Producer and Director of the film, led a discussion afterwards. 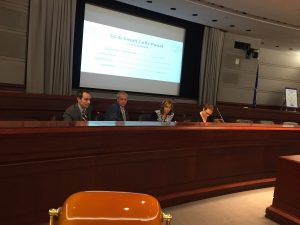 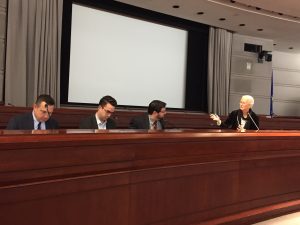 Our last panel of the day focused on financing & E-rate models. The panel was moderated by Deb Socia, Executive Director, Next Century Cities and featured Christopher Mitchell, Director, Community Broadband Networks, Institute for Local Self-Reliance & Policy Director, Next Century Cities; Garrett Brinker, Product Manager, Neighborly; and Tom Coverick, Managing Director, Keybanc Capital Markets. The panelists stressed the importance of developing a financial plan for a project as early as possible and walked through some of the different financial models that are available for building fiber networks. 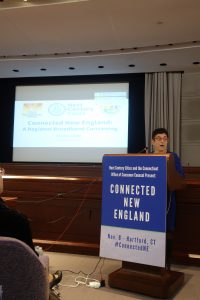 We ended the day with a keynote delivered by Gigi Sohn, Distinguished Fellow, Georgetown Law Institute for Technology Law & Policy. She focused on the progress being made at the local level across America regarding community broadband, net neutrality, and digital inclusion, despite a lack of support from the federal government. Her full remarks are available here.

“I have no doubt that the most important work to ensure that all Americans have access to affordable, high speed broadband is happening in local communities like Chicopee and Taunton, Massachusetts, Longmont Colorado, Imperial County California, Fairlawn Ohio and Kent County Maryland.” 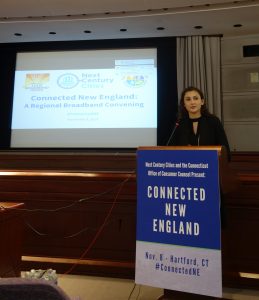 Cat Blake, Policy and Program Manager at Next Century Cities, wrapped up the day with a thank you to speakers and attendees. She noted the diverse attendance in the room, and how, while every community is different, there are certain things that every community can begin to work on. These first steps might include identifying community leadership, exploring funding options, and leveraging existing assets. As communities across the country work to harness the transformative power of broadband, digital equity must remain a priority to ensure that everyone benefits from this essential utility. 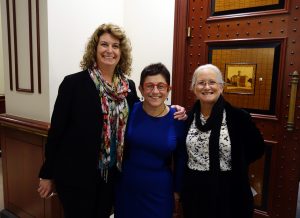 Learn more about Connected New England on our site here, and watch the full event here