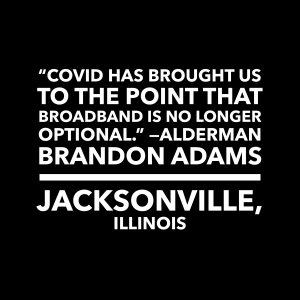 The University of Illinois Extension Local Government Education Program and the Illinois Department of Commerce and Economic Opportunity Illinois Office of Broadband partnered with the Benton Institute for Broadband & Society to implement the Developing Broadband Leadership Webinar Series. The leadership series is a four-part workshop launched as part of the Connect Illinois initiative, a phased $420 million initiative implemented to expand broadband in unserved and underserved municipalities statewide.

On May 13, 2020, Illinois Governor J.B. Pritzker opened the inaugural webinar titled “Broadband — Now More than Ever” by sharing information about Connect Illinois and the first two rounds of grant awards. Participants also heard from Roberto Gallardo from the Purdue Center of Regional Development who shared statistics on broadband connectivity across Illinois, accounting for demographic factors such as race, education, and income.

At the center of the call were local officials from three Next Century Cities municipalities in Illinois including Carbondale, Highland, and Jacksonville who spoke about broadband connectivity efforts in their respective communities. Next Century Cities’ own Francella Ochillo moderated the discussion.

Steve Mitchell, Carbondale’s Economic Development Director, discussed the significance of digital literacy, so that household decision makers could make informed choices about broadband connectivity and maximize the use of digital devices and Internet connection. Mitchell stated, “It [broadband access] goes beyond technology. The [household] decision makers have to have the awareness of the need for broadband, and they [need] the devices and the skillset.”

Mark Latham, the City Manager of Highland, spoke about how broadband has helped attract employees to the area, strengthen the existing workforce, and connect students in multiple school districts. The city has a 98% connectivity rate, and Latham cited a recent report indicating that 58% of residents considered Highland’s connectivity as a key factor in their decision to maintain residence in the city. He closed by stating his opinion that, “This issue [broadband access] is the number one issue for the state of Illinois. Period.”

All three city representatives highlighted the significance of network access, especially in the wake of COVID-19.

Alderman Brandon Adams of Jacksonville, detailed the hardships that Jacksonville residents face when they remain largely disconnected in a technologically-dependent society. Adams considered how Jacksonville’s most vulnerable citizens could benefit from a municipal network, especially when COVID-19 safety measures limit in-person assistance for elderly and differently-abled individuals. Alderman Adams emphasized that, “COVID has brought us to the point that broadband is no longer optional.”

Carbondale moved to swift action to get school busses outfitted with Wi-Fi so that the 40% of school-aged youth without at-home Internet access could complete assignments. Highland indicated that their municipal network and high adoption rate allowed residents to quickly adapt to remote learning and teleworking when Illinois issued a statewide stay-at-home order.

Next Century Cities works to elevate the voices, challenges, and success stories of communities working to provide their residents high-speed connectivity. The series is free and open to the public. Webinars take place weekly on Wednesdays at 11:30 a.m. CT through June 3rd. Register for upcoming sessions by following this link.