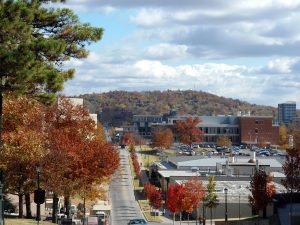 A few years ago, Mayor Jordan initiated a planning effort to strengthen the economic vitality of Fayetteville. Broadband access was quickly identified as essential to workforce development, preparing residents for tomorrow’s jobs, and providing resources to attract the high tech sector, a target industry for the city’s economic development efforts. But as we dug into the issue of broadband, we realized the scope of its impact. High-quality internet access is the key to the future of education, healthcare, civic engagement, expression, startup entrepreneurs and technology companies, and so much more. We knew that we had to make digital equity a priority for all of Fayetteville.

Mayor Jordan created a digital inclusion task force to identify digital inclusion goals. The task force is a coalition of stakeholders that each bring individual assets and ideas to the table. For example, the public library system is a natural partner and offers insight into digital literacy training in the community. The University of Arkansas has also been an invaluable partner and has provided task force leadership and support. The Task Force leadership includes one City Council Member as well. The Fayetteville Public School District is working with the City on its Workforce Development Plan; a logical extension of this plan will be digital equity. The city’s Information Technology department has also been running point in developing a Dig Once policy – where the city considers placing fiber or conduit in the ground when constructing sidewalks and trails – just in time, as the city undergoes a major period of development and construction.

In order to broaden the conversation, the task force planned a series of public engagement events. Each event played an important role in helping understand the impact of broadband. We were lucky enough to kick off our event series with a talk by Joanne Hovis, the president of CTC Technology & Energy and the co-founder and CEO of the Coalition for Local Internet Choice. Joanne spoke about several other communities’ pursuit of high-speed broadband, and took the time to meet with local groups to discuss their role in city-wide digital inclusion.

Our second event featured a talk by David Frederick, an associate professor of classics and director of humanities in Fulbright College at the University of Arkansas. David’s work explores 3D immersion gaming as a future of education, and his presentation really drove home the point that a quality connection is no longer optional for kids to do their homework. His key message was “The Future of Education is Broadband.”  Education is moving online, and our students need to be able to follow. In the last hour of the event, attendees worked together to brainstorm ideas for improving digital literacy in Fayetteville.

Most recently, we invited representatives from AT&T, Cox, and OzarksGo (the telecommunications subsidiary of Ozarks Electric Cooperative) to talk about the state of connectivity in Fayetteville and options for low-cost access. We found that bringing providers together in a discussion with community members was integral to understanding how we could best work collaboratively to serve our residents.

Our next step in the Digital Inclusion Plan is to work to deliberately and consciously build a broad and representative coalition. We want to identify the social networks that exist in our community, and activate those networks to form a plan that is best for Fayetteville. The next wave of this process will be to move this coalition’s conversation to SpeakUpFayetteville, which is our city’s civic engagement platform. From there, we will work together to develop action steps to ultimately create a more connected Fayetteville.

Joining Next Century Cities has provided us with helpful resources and opportunities to pursue this plan. Additionally, it’s been absolutely essential throughout this process that we’ve had support from our Mayor. Communities looking to pursue their own digital inclusion strategies should first consider engaging city leadership. We are lucky to have a Mayor that understands the importance of social justice – and that internet access at its core is a social justice issue.

Susan Norton is the Communications Director for the City of Fayetteville, Arkansas and a member of its Digital Inclusion Plan Task Force