A Conversation with the Oil Creek Library District 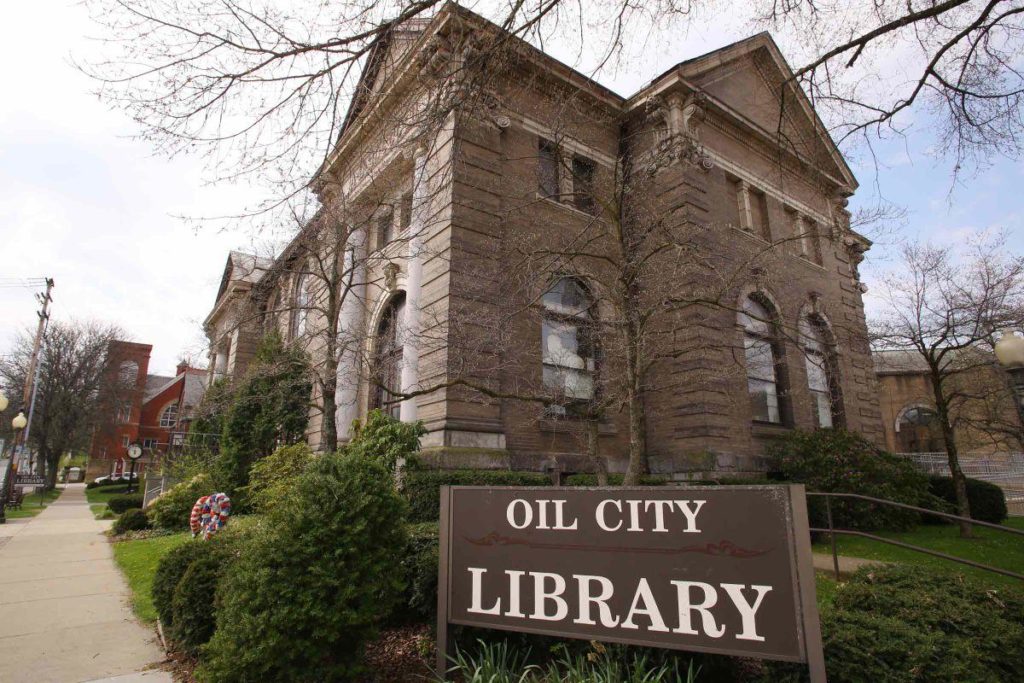 If you could tell us a bit about your role and what you do with the Oil Creek Library District?

I am the District Consultant. The shortest way to describe that is I am the “librarian’s librarian”, so I am a resource for them. I don’t work directly with the public for most things. I work with the libraries so that they can then take the things to the public. In my district I also run our district electronic databases and OverDrive. We’ve been working a lot in the broadband area. We’ve been doing this for years, but the pandemic let somebody actually listen to the megaphone that we’ve been trying to bring to this issue for a long time.

Getting our libraries to have resources — the equipment that they need to get up to standard. We’ve been investigating trying to get satellite sites to get the internet out in our district. Our towns are fairly well-resourced. We can get 25 Mbps in town without much problem, but you can go a mile out of town and get dial-up. We have been trying to figure out ways that we can help get the infrastructure into our areas that need it. But we don’t even have cell coverage in much of our areas, so hotspots are a challenge.

How many libraries are in the Oil Creek Library District?

I have twelve libraries and fourteen outlets.

What do the populations look like? Are they mostly rural?

Why are people coming into the library? What kind of assistance are they seeking?

Using the computers is a big thing. People come in for technology help. We always have a plan for after Christmas when everybody gets their relatives those new devices and we help them learn how to use them.

We’re still very print and physical material oriented and that was one of the biggest challenges with the shutdown during the pandemic. People mainly just wanted to have the books back, and though we saw increases in OverDrive, our other databases saw a one-month jump, and then a drop. The broadband connectivity means we’re not able to do as much virtual reaching out.

A lot of our people want programming back, and we can’t do that to the same level. So we have a lot of people coming in using the library as a meeting space, even if it’s not library programming. They come in to get that one-on-one training or they come in for having a neutral space to meet with someone else, instead of at home. Our communities don’t have a lot of meeting places like coffee shops and parks, especially in the winter time.

A lot of libraries also provide services like passports.

Would you say that the concerns for residents are different in the face of the pandemic? Is their knowledge of this technology more advanced, or do they have different questions or concerns around it?

There’s definitely more frustration in our area because we don’t have the infrastructure for doing so many of the virtual things and the demand is there. It’s challenging to meet the needs of people who really want to be able to meet in person and to pick up that physical item when we’re not doing any of that.

There is a frustration with, “Yeah working from home is great. Online schooling is great. Until you have four kids in the same house and they’re on 25 Mbps and they’re all supposed to be doing video at the same time. Two parents and four children can’t all do work at the same time on the same internet connection. It’s been a real challenge for schools in particular — university students being at home and not being able to access the speeds to get to the resources they need.

We’ve had to really limit Interlibrary Loan, which is putting a bit of a strain on our resource budget because we can’t borrow books from other libraries. We are borrowing locally — like within the county and district, but we’re not able to really tap into the Philadelphia and Pittsburgh resource centers to get those other books. There is a need for information and people want it in physical form, and we’re not able to get it to them because our networks are just down. That’s been a challenge.

Most of our patrons, aside from needing to learn some new skills with platforms like Zoom, it’s not so much a skills gap as it is the infrastructure not supporting what they need to do, so the question is, “How do we get around it?” That’s been our biggest new challenge — there’s a perception that people just don’t have the skills to do it, and that’s a piece of it, but when your infrastructure is throwing up so many roadblocks, how many of those roadblocks can you get around before you just give up. Our libraries help keep people going, and help them find workarounds that work for them.

Is there anything else you would like residents to know about your work?

Funding is important, and resident advocacy would help us to garner support for the cause.