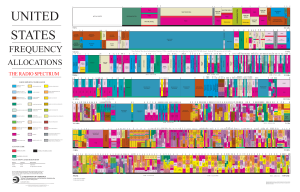 Electromagnetic spectrum touches our lives in more ways than many people expect. Its uses range from the licensed spectrum that companies use to provide cellular service, satellite internet, and broadcast television, to the unlicensed portions that support in-home WiFi, connected devices, and Bluetooth. However, these precious frequencies are not unlimited.

Historically, the National Telecommunications and Information Administration has been the agency responsible for determining which spectrum should be cleared, repurposed, or otherwise made available for public use. Once the decision has been made, the responsibility passes to the Federal Communications Commission (“FCC”)  to develop the rules for how this spectrum is to be used and auction the spectrum, if necessary.

When spectrum is made available, it is generally divided into one of two categories: licensed and unlicensed. Licensed spectrum is sold by the FCC to certain users which pay a licensing fee for the exclusive right to transmit on an assigned frequency. This is also generally within a certain geographical area. This assures users that nothing will interfere with their transmissions. Unlicensed spectrum does not require potential users to buy a license or get permission from the FCC before they are allowed to operate within an unlicensed band. However, unlicensed users must only operate within the spectrum bands designated for unlicensed use. Unlicensed spectrum is used in public wifi, by wireless internet service providers, and for other in-home low-power uses like routers.

In 2020, the FCC took steps to open up the 5.9 GHz band for unlicensed and automotive safety uses. This band was previously reserved for dedicated short-range communications (“DSRC”). DSRC was designed and enabled vehicles to communicate with each other and other road users without involving cellular or other infrastructure. Now, the FCC proposes to make 45 MHz of the band available for unlicensed use and another 30 HHz available for auto safety, specifically for Cellular Vehicle-to-Everything (“C-V2X”).

Opening up this spectrum has not been a smooth process. The Department of Transportation (“DoT”) claims that transportation safety stakeholders would require the full 75 Mhz of the band in order to meet their own needs. Essentially, the agency argues that allowing some of this spectrum to be used by unlicensed operators makes the roads a more dangerous place. However, once the DoT transitioned to the Biden administration, it rescinded these comments and sided with the FCC. This has not, however, satisfied the 50 state departments of transportation that filed suit against the FCC in January 2022.

The FCC based its Report and Order on the record compiled during the comment and reply comment period, which included DoT comments. In fact, the FCC highlighted that the DoT provided additional feedback on drafts of the report and order and in private in-person meetings with staff.

All in all, creating new opportunities for communities to utilize the spectrum to help connect their residents is essential. Spectrum that has been dormant for 20 years would be the natural choice to be repurposed. Allowing this spectrum to be utilized for unlicensed use could provide communities vital resources to create public wifi networks, build new wireless systems, or bolster already existing wireless solutions. Additionally, ensuring that agencies collaborate and highlight concerns is essential to prevent unnecessary delays like those related to the 5.9 GHz and C bands.