Broadband Communities Summit: Connecting the People Who Connect Our Communities 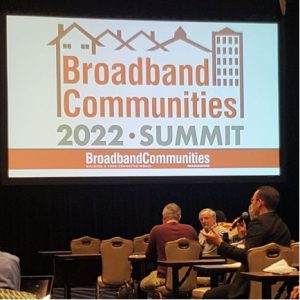 The Broadband Communities Summit kicked off an exhilarating month for broadband advocates in Houston, Texas, from May 2nd through 5th, 2022.

In addition to the excitement of gathering together for the first time in years, the anticipation for upcoming clarifications for the broadband funding sections of the Infrastructure Investment and Jobs Act was palpable. This energy peaked on day two with a panel discussion with NTIA, Treasury, FCC, and USDA officials who provided status updates on their funding initiatives. Each representative shared current operational perspectives and candidly answered questions from local leaders and service providers.

Federal officials advised practitioners to press for state-level engagement with federal programs. While each agency’s funding programs have varying timelines, officials explained internal coordinating processes. If you’d like to learn more about the individual programs, Next Century Cities created a series of Broadband Funding Explainers.

Day one of the conference included a workshop on open access networks and a series of panels coordinated by the Coalition for Local Internet Choice (CLIC). One highlight of the CLIC-hosted panels was “The Public Sector’s Perspective,” moderated by CLIC’s Catherine Rice and Christopher Mitchell from the Institute for Local Self-Reliance. During the panel, Will Aycock, General Manager of Wilson, North Carolina’s community broadband network, shared the incredible partnership he’s developed with Wilson Community College. Through collaborative efforts, they created an apprenticeship with the U.S. Department of Labor, where students who complete the program will receive an accredited Optical Telecom Installation Certification or OpTIC.

Kenrick Gordon, the Director of the Maryland Office of Statewide Broadband, emphasized the importance of fostering partnerships in a mutually beneficial way, explaining how he prioritized convening the county CIOs and creating community amongst them early in his tenure.  Joshua Williams, Innovation Fellow for the City of Houston, shared his belief that poor partnerships usually have warning signs like a lack of follow-through or poor customer service. Williams also reiterated the importance of setting clear, agreed-upon standards at the outset of partnerships, describing that Houston prioritizes symmetrical 100 Mbps connections for its public-private partnerships but will work with partners able to provide 100/20 Mbps if there’s appropriate transparency.

Day three of the conference included the presentation of the Cornerstone Awards, which recently expanded to include and recognize achievements in broadband and telecommunications for communities and municipalities.  Two NCC Members – Bristol, New Hampshire, and Fort Collins, Colorado – were recognized for their respective efforts.

We are excited for what will come from more frequent gatherings among broadband advocates where attendees are genuinely invested in each others’ success. Convening with members of the broadband advocacy community helps reinforce why we have all chosen to do this work.